We started at a train station in Budapest. Traveling at some 50 mph, we sped across the Austro-Hungarian border into Austria.

In 1947, before she got on a train, Oma remembers sleeping in a train station in Budapest for a few nights. Oma traveled in a train for German soldiers returning to Germany after the war.

The train from Budapest stopped in a town near the Hungarian border. The whole group of 17 refugees got off the train because they did not have papers to travel. At the border, the Austrians and the Hungarians started shooting at the group, and half of the group got stuck on the Austrian border and the other half got stuck on the Hungarian border. Oma and her family were at the Austrian border, where they were thrown in a basement to sleep on straw. The next morning, they stood before an Austrian commander where my great-grandmother explained that they were to meet her husband in the Alps. They told them to depart but never tell anyone that the Austrian soldiers let them leave.

They took a train to Vienna, where they searched for cousins. Some nice people let them into their apartment and they slept on Persian rugs. Oma cites it as the time she first saw true opulence. The next day they found the cousin, who was a barber, in Vienna. I have beautiful pictures from the day that they met.

Today, our train pulled into the rainy Austrian capital. And tomorrow, we continue Oma’s route to Austria. 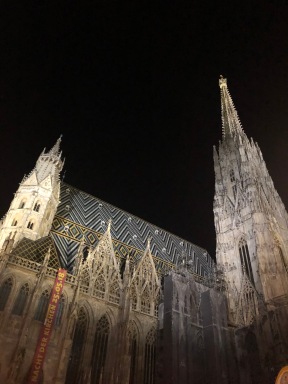 The outside of St. Stephen’s Cathedral in Vienna at night

A carnival happening in front of St. Stephens Cathedral

The lit-up inside of St. Stephen’s Cathedral at night. Organ music was also playing.

View all posts by travelswithtalia15