On either side of the car, the Austrian alps opened up. Traveling through the greenery and the foothills of the alps, we arrived at the doors of the Admont Abbey in Admont, Austria. There, Oma’s friend, Baerbl, met us at the door. They went to school together 60 years ago in 1948. 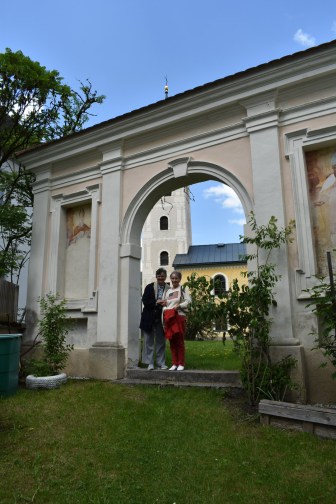 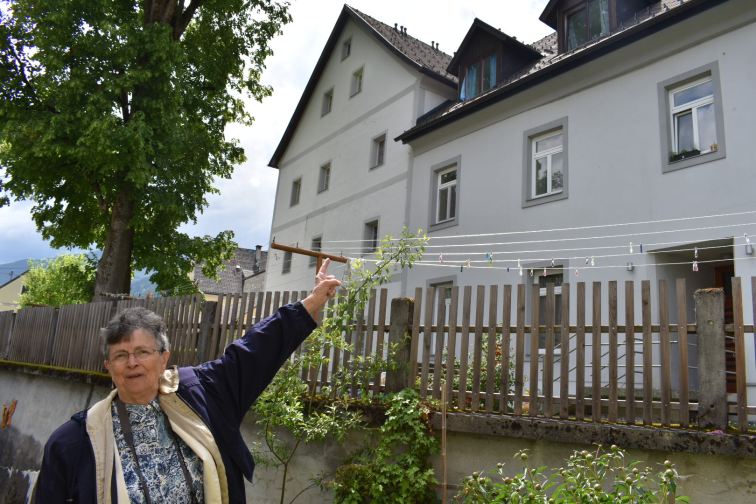 Oma pointing to her room at the school

We entered what is called one of the 8 wonders of the world, the Admont Abbey Library. With over 200,000 books, the Abbey’s oldest book is from 808 AD and is an dictionary, it was found in a random box last year. It’s the largest monastic library in the world. The style is a mish-mosh of neoclassical, rococo, baroque design. Frankly, it was kind of ugly in a beautiful way. While standing in the library, I was talking about the Dead Sea scrolls to my mom, when about five old Austrian women loudly shushed me with angry faces. My mom remembers some old Austrian woman telling her to “shut me up” when I was about 3 in Vienna. I guess I’m a little too Talia, a little too loud for Austria.

Getting on the train in Vienna, Oma, her brothers, and her mother set out for Essling bei Altenmarkt, Austria. They traveled to the end of the Russian zone, the border between the Russian and British zone. None of the family had papers, and they stopped at a truck stop right by the border. Oma’s mother convinced a truck driver to take them to Altenmarkt, and the truck driver’s said that he would say they were “his family” if they got caught. This was a huge risk for them. In big trucks, they arrived and Oma doesn’t remember how they got to Essling. Once in Essling, they found the schoolhouse where her father was a teacher, but he wasn’t there. He was eating lunch at a guesthouse up on the hill. Some neighbor ran up and they had their over four-year reunion. Once they were there for a little while, her 3 year-old brother, Harold, asked Oma if “they could talk now,” because on their whole escape, they had been continuously told to be quiet or they would all be caught. I can’t imagine the whole experience. 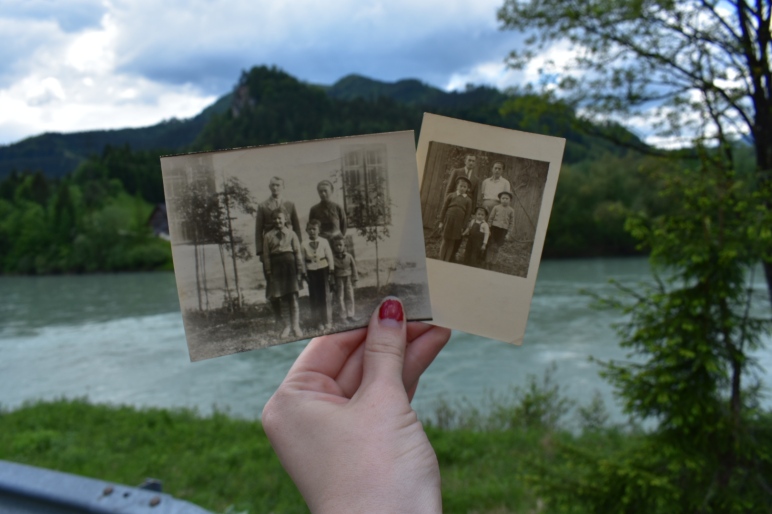 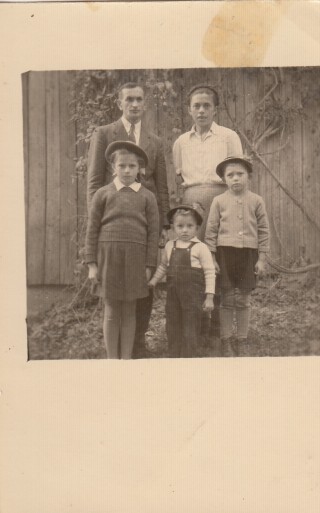 Oma was placed in the 4th/5th grades with her father as her teacher for two years. Up to age 9, she had only very basic schooling and WWII stunted the schooling that was offered to her. The next year, she tested into a high school (what Americans consider middle school) in Admont, a nearby town. She attended for one year, but then the family immigrated to America because her father was going to be moved to a more rural town as the teacher.

We walked through Admont town, and saw the building where Oma and Baerbl went to school. Oma even pointed out the room where she studied. That’s where she learned Greek, Austrian, British history. She credits it as a place of learning and where she learned to appreciate the life of the mind.

The mountains closed in one the road, and the river appeared beside us. “There it is, it’s by the curve,” Oma said. The river, a crystal blue color, curves. Between 1949 and now, the river was made wider by a dam and her home, the old schoolhouse, was destroyed. We pulled into a road by a power plant, and walked on the road, which Oma thought was her road. On our left, tons of ruins of trees. I even saw a piece of wooden board. A black snake peaked out at me and hissed at me. The river was absolutely beautiful, like something out of a fairytale. It’s easy for me to imagine the whole family here. Driving up the hill, a meadow opened up in front of us and we saw the guesthouse where Oma’s father always ate. We walked the same route as him, almost in his footsteps.

This is the end of our journey with Oma, the end of the road for her escape. What we did in 7 days, she did in 11 days, all those miles and trains and people and borders. Guess what? It’s pretty much the same today, time goes on, and people continue the same patterns. If anything, I think I leave this leg of the trip with more questions about my own identity and how others identify.

View all posts by travelswithtalia15

One thought on “May 9: Up and away to the Austrian Alps”